Petrofac was strongly represented at the recent Total E&P UK SHE (Safety, Health and Environment) Awards, with three nominations and a Best Newcomer award.

The awards, now in their 11th year, recognise the outstanding achievements of the nominees and their passion and commitment towards health, safety and the environment.

Kevin Conway, Production Technician, won the Best Newcomer award, which recognises the professional capability and wider contribution made by an individual within their first three years in the industry. Kevin joined Petrofac in 2013 with no offshore experience. His winning nomination recognised that his attitude and behaviour towards safety is to be commended and more recently, he reported a slight smell of gas and worked through the night until the minor leak was detected. 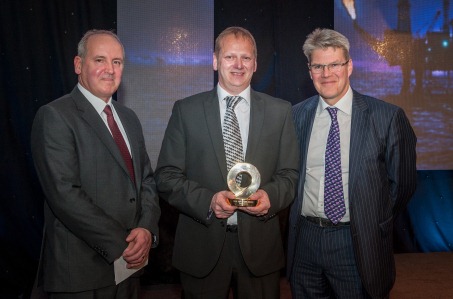 Sandy Fraser of Paragon Offshore (left) and David Hainsworth of Total present the Award to Don Kelly, on behalf of Kevin Conway

Also shortlisted in the awards was Mark Williams as ‘Safety Representative of the Year’. Mark was nominated by his peers and colleagues for his ability to lead by example and was last year’s winner in the same category.

The Alwyn Services Team Leader and Deck Crew were finalists in the Best Environmental Improvement/Intervention category for their innovative ‘Skip Police’ initiative – a simple idea that has had a positive impact on environmental performance.  The Deck Crew now educates other team members on the correct segregation practice and as a result, the site has generated improved statistics from skip audits.

Andrew Ferguson, Vice President, Operations Services, commented: “Congratulations to Kevin and the other nominees for representing our business and consistently delivering safe operations for our clients.”

Find out more about the Total SHE awards.