The team were joined by representatives of our client Orpic, our joint venture partner Daelim Industrial Co Ltd, and other partners.

The ceremony marked the completion of the project’s overall performance test on 30 December 2017.

Around 400 people attended the event, including Ahmed Saleh Al-Jahdhami, CEO of Orpic, and Christiaan van der Wouden, COO – both of whom presented a number of awards in recognition of outstanding contribution.

Petrofac’s Project Director, Srikanth Nagaraj, was thrilled to be presented with an “Outstanding Achievement” award from Ahmed Saleh Al- Jahdhami, CEO of Orpic. He said: “This is a very proud moment marking the signing of the overall Performance test. The event has been a wonderful opportunity to get together with some of the key partners who have worked so closely since we were awarded the contract in 2013.” 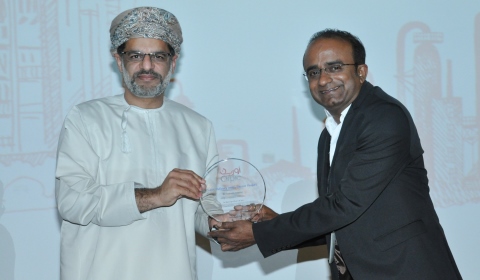 Located 230 km north west of Muscat, Petrofac’s scope in delivering the project encompassed engineering, procurement, construction, start-up and commissioning services. The contract included building a state of the art refinery and as well as improvements at the existing Refinery.

Now complete, it is anticipated that the facility will increase previous output by more than 70%.

The project’s safety performance was exemplary, achieving more than 53 million man-hours without a lost time incident. The creation of In-Country Value (ICV) was a guiding principle throughout, involving the training and development of Omani nationals and the support of local supply chains.

A video charting the revamping of the facility, including impressive time-lapse sequences and aerial footage can be viewed below: