Petrofac Training Services (PTS) is celebrating a major milestone of 1,000 launches of its industry-leading freefall lifeboat at its Aberdeen Marine Training Centre.

The freefall lifeboat system, which is used on many ships and oil and gas platforms worldwide, uses gravity to propel the lifeboat into the sea and clear of any danger. The freefall facility, officially opened in May 2011, is based on a Verhoef lifeboat and is the only one approved for training oil and gas personnel in the UK.  In addition, the centre includes the country’s largest fleet of marine training vessels, including fast rescue craft and twinfall and singlefall lifeboats.

The lifeboat was most recently in the news last month, making a splash as it escorted the Queen’s Baton on its journey to the Commonwealth Games in Glasgow.  The baton was plunged, by the lifeboat, into Aberdeen Harbour in spectacular fashion for a tour that provided a unique vantage point to recognise Aberdeen's maritime history, its diversity of industry and scenic coastal location.

George Masson, Survival and Marine Team Leader said: “We are proud to be celebrating this tremendous milestone at our popular marine training centre. The 1,000th launch is only the beginning and is a ‘drop in the ocean’ of our overall expectations for this unique facility in Scotland.” 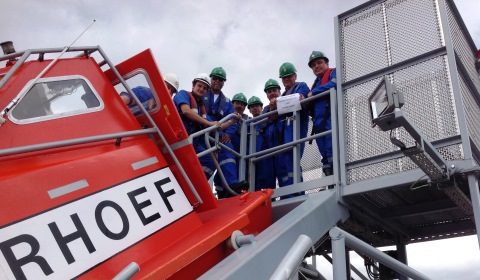